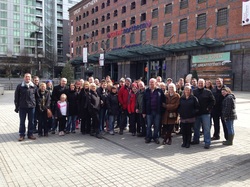 BOC group starting tunnel tour March 2013
UNFORTUNATELY THESE TOURS HAVE BEEN SUSPENDED INDEFINITELY BY THE SITE OWNERS FOR HEALTH AND SAFETY REASONS. THE ONLY UNDERGROUND TOUR AVAILABLE IN MANCHESTER AT PRESENT IS THE HAUNTED UNDERWORLD TOUR AVAILABLE HERE.


These have to be booked ahead but are very very special, leading people into the atmospheric underworld of Manchester under the Great Northern Goods Warehouse .

They are visually stunning - see pictures below - but tell a moving story.

On one of my tours we also maybe spotted a ghost - click here.

For a bit of the history of the tunnels scroll down the page to the section after the dramatic pictures.

If you feel tempted then remember to bring a torch and wear sensible shoes as the tunnel is dark and there is some mud. But if you're in good health and capable of walking down (and back up) fifty or so stairs to access the tunnel then you're in for an unforgettable experience. The tour lasts just over an hour.
Meet outside The Bridgewater Hall, Lower Mosley Street, City centre, M2 3WS.
Please bring along the Paypal receipt as your booking confirmation. This is sent automatically by Paypal when payment is made.

Call me on 07876235638, email me on jgschofield@btinternet.com. Follow me on @JonathSchofield

UNFORTUNATELY THESE TOURS HAVE BEEN SUSPENDED INDEFINITELY BY THE SITE OWNERS. THE ONLY UNDERGROUND TOUR AVAILABLE AT PRESENT IS THE HAUNTED UNDERWORLD TOUR ABOVE. 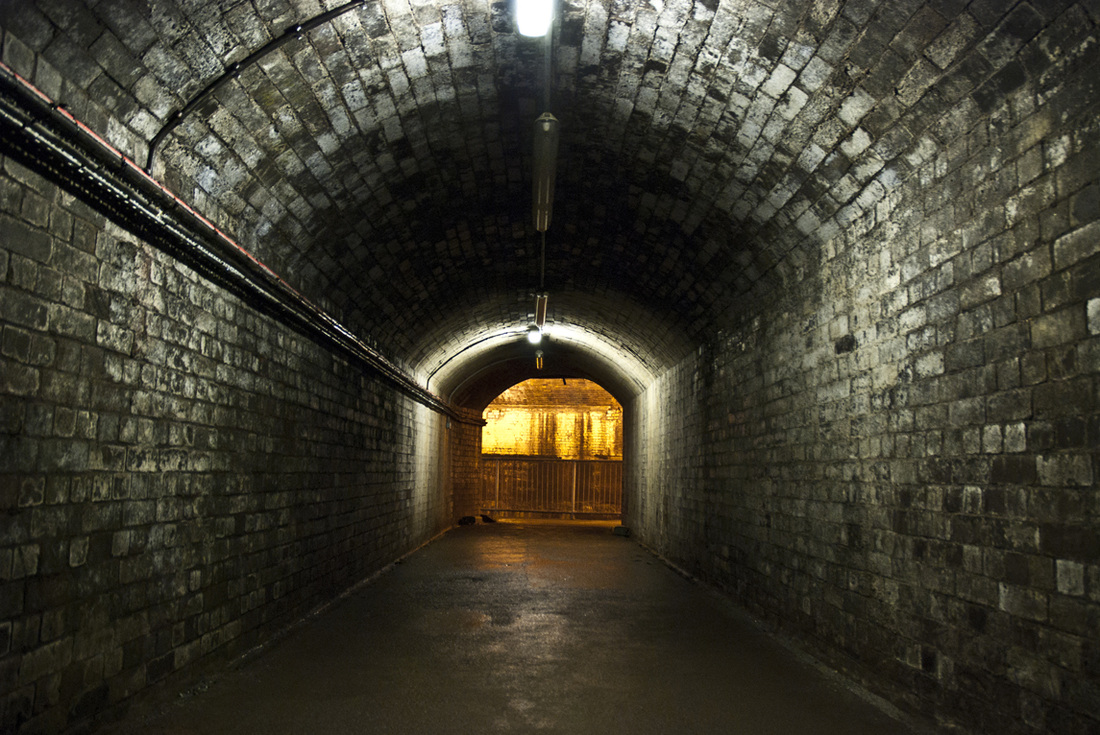 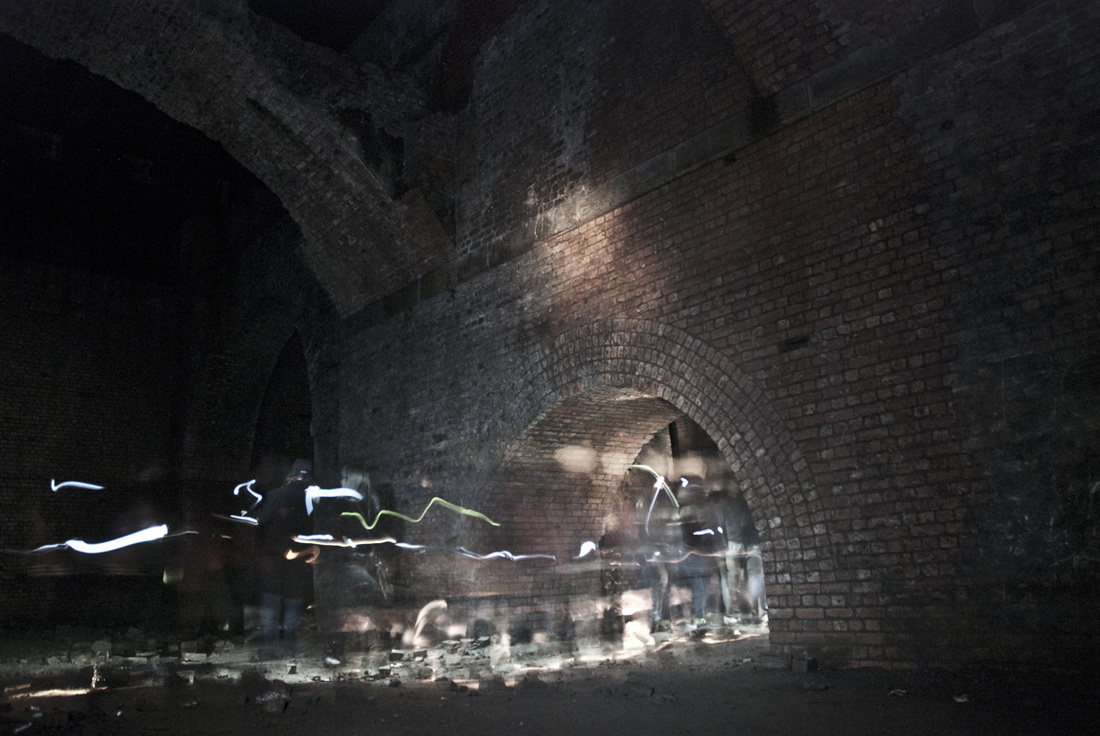 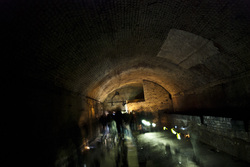 The tunnel we access on the above tours contains the Manchester and Salford Junction Canal (MSJC) and is accessible for several hundred yards. The canal opened in 1839 and linked the Rochdale Canal with the River Irwell.

You can still see the start point on the Rochdale Canal at Rain Bar, with the arm that curves round to the Bridgewater Hall. The western entrance on the Irwell is marked by the stranded lock sitting on it's own in front of the Le Meridien Victoria and Albert Hotel on Water Street at Granada.
It's tempting to think that the idea for the canal was dreamt up in the Pev or the Briton's, the old pubs close to Rain Bar. At best it's the sort of great idea you get after a gallon of ale. It never had a hope in hell. Ruinously expensive because so much of its length was in a tunnel, and with expensive pumphouses as well, there was a final fatal flaw. During construction the Bridgewater Canal, that met the Rochdale Canal in Castlefield, opened a much shorter link from  their canal to the River Irwell. Their fees were much lower than the MSJCs. Money talks.

In the 1880s the construction of Central Station (now Manchester Central, previously G-Mex) closed the eastern half of the canal. In 1889 the adjacent Great Northern Goods Warehouse opened as a transport interchange with rail, road and water transport coming together.

Even as part of an interchange, the canal failed to generate significant traffic despite the construction of lifts to bring up and take down goods. In World War II the transport function ceased as the now drained canal was split into a series of blast proof bomb shelters with air raid warden quarters, chemical toilets and so forth.

Taken all together this is a rich, rich history. And it's still all down there.

Sitting eighty feet beneath Manchester's streets, in the impenetrable dark, lie wharves with tie-up posts, a tow path, walls cut through bedrock and all the construction associated with the bomb shelters. More recently someone has sketched a devil and labelled it 666.

Under Manchester Central are two vast chambers with ruined lift shafts resembling subterranean watchtowers. One wide staircase kinks to the left as it climbs. Illuminated only by the torchlight, it is both grand and sinister, almost dreamlike as it stretches ahead. You can't help anticipating, with a tingle, about what might lie round the corner.

The final surprise lies at the western end of the tunnel. Here the canal floods and becomes impassable. The water is crystal clear – Manchester Evian. Granada TV cut off the water flow from the mucky River Irwell in the 1960s while building their studios. What you see is bedrock water that's percolated back through the ground: a process, apparently, which can take 2000 years.This is a humbling thought. Manchester was founded in 79AD by the Romans, a short distance from the MSJC. No traces of buildings have been found before this date.

So forty feet down in the city centre you can gaze at a living element that predates the city and all it contains. 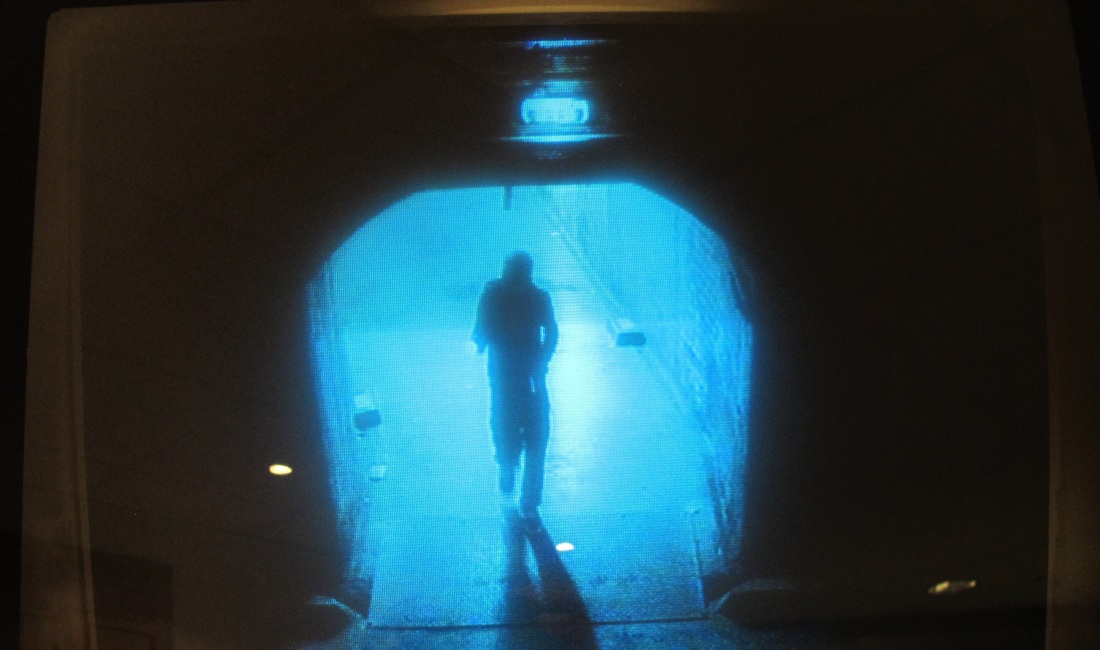 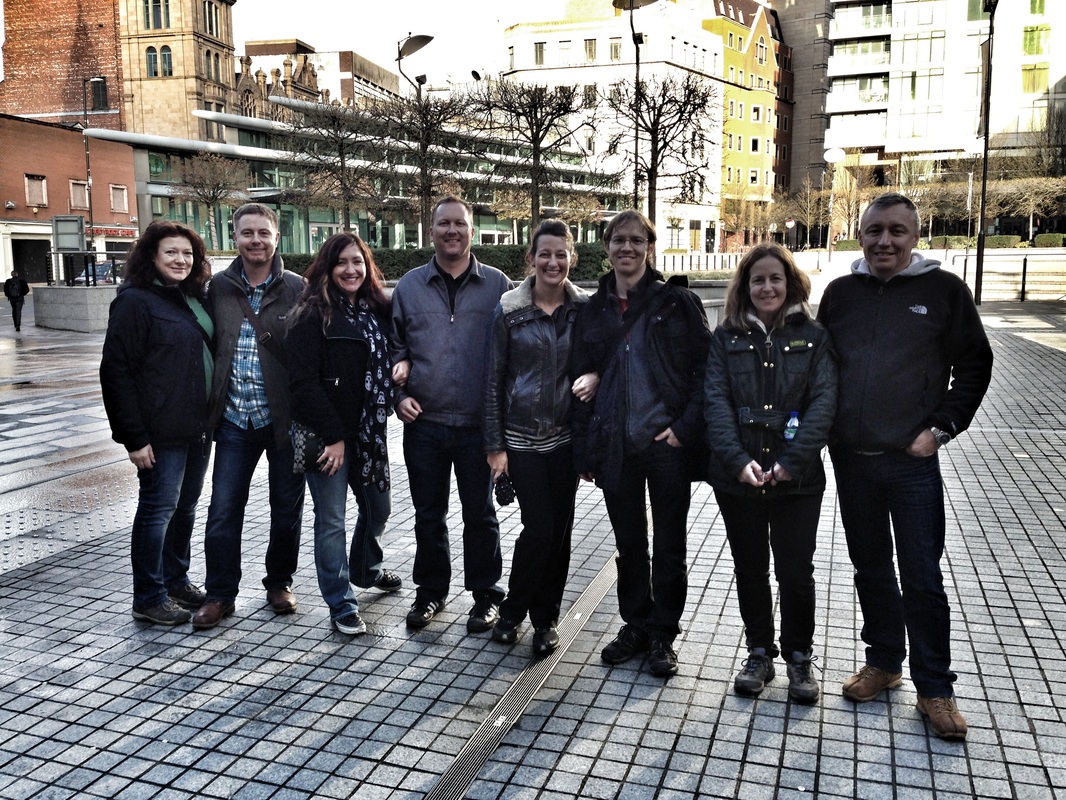 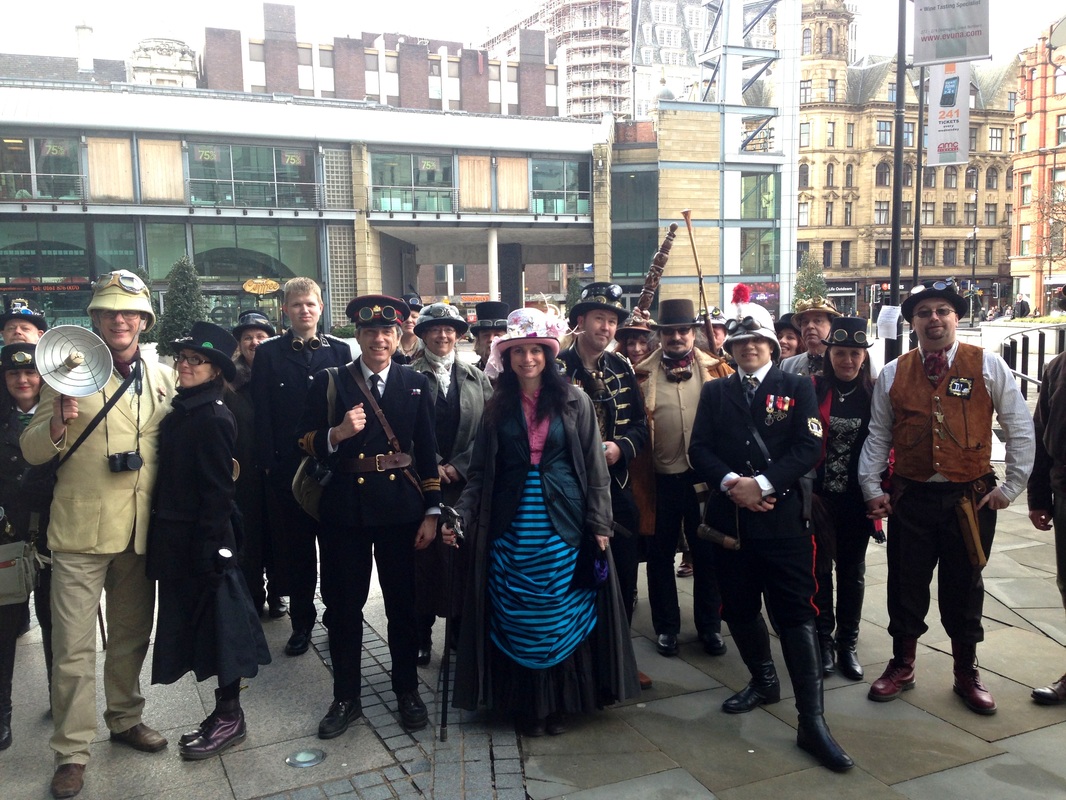 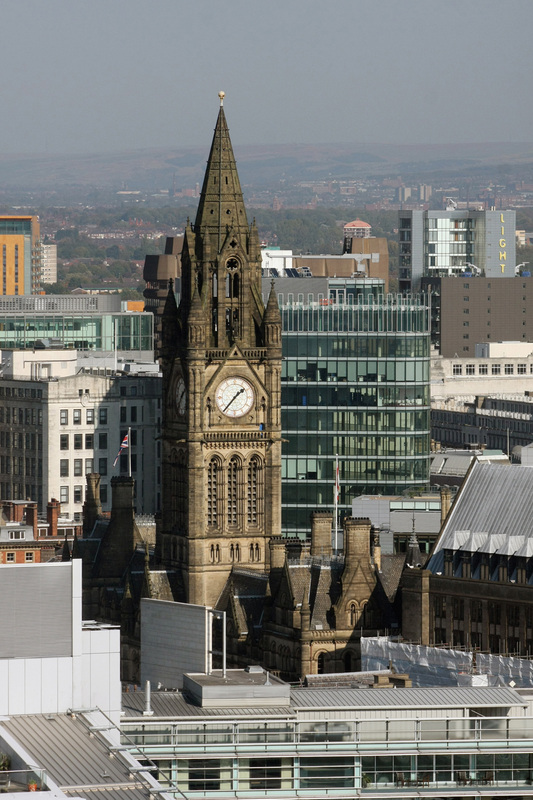 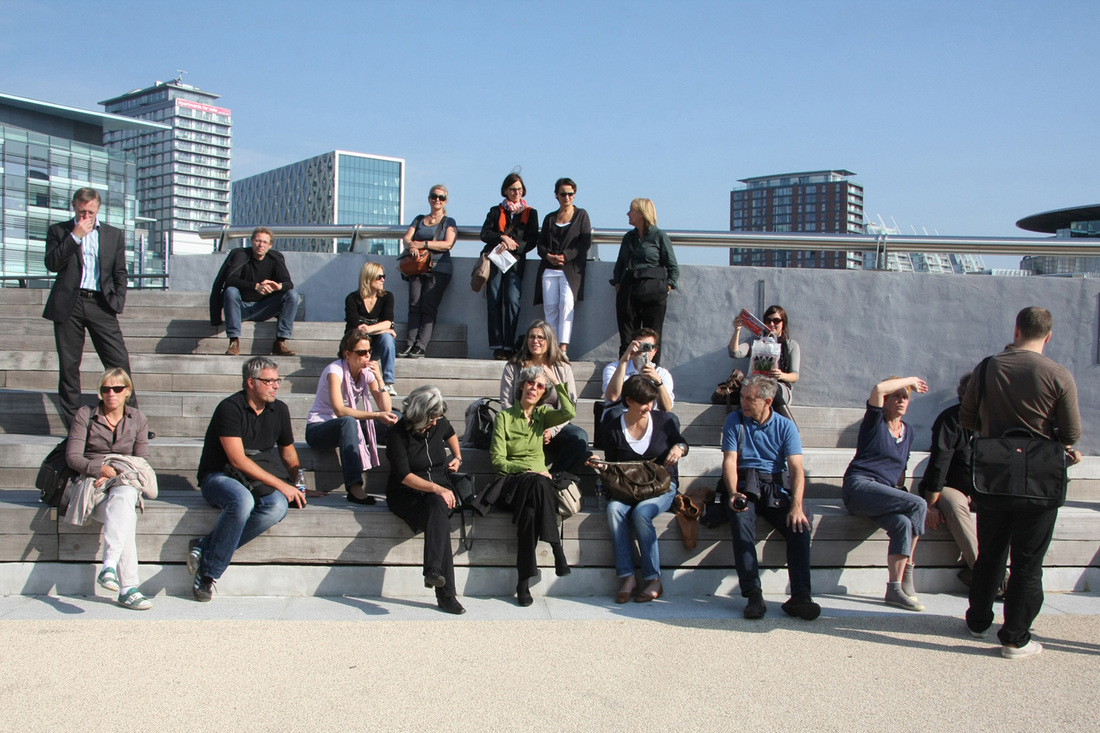 German guests at The Quays, I'm on the left in the suit